The end is tantalisingly near. I can almost feel the weight of the book in my hand and smell the print on the page. This eight-year journey of narrating Ms Forgotten Australian’s biography has been much longer than I expected. We’re not quite there yet and I feel so impatient!  I’ve sat with frustration and a sense of injustice as we were delayed by legal matters. I’ve struggled to harness my patience while those who matter needed time to reflect on the impact the book would have on them. I’ve been exhausted and bored by the seemingly endless hours of work. Now, as we get much closer to having a book, alongside excitement I feel the bubbling cesspit of anxiety and fear.

My mind wanders to thoughts like “What if people tell me the book is terrible?” “What if no one reads it” “Who am I to think I can write a book?” “What if my peers, or clients, think I’m an awful psychologist?” “What if there are mistakes I haven’t found?” “What if I’ve misrepresented Ms Forgotten Australian?”  “Self-publishing is not the same as being a real author!”

We all experience self-doubt but I refuse to allow self-doubt to ruin this time for me. I was musing over how to manage these thoughts and feelings when a client mentioned the Man in the Arena quote by Theodore Rosevelt and a talk on the topic by Brene Brown.

The woman in the arena

It is not the critic who counts; not the woman who points out how the strong woman stumbles, or where the doer of deeds could have done them better. The credit belongs to the woman who is actually in the arena, whose face is marred by dust and sweat and blood; who strives valiantly; who errs, who comes short again and again, because there is no effort without error and shortcoming; but who does actually strive to do the deeds; who knows great enthusiasms, the great devotions; who spends herself in a worthy cause; who at the best knows in the end the triumph of high achievement, and who at the worst, if she fails, at least fails while daring greatly, so that her place shall never be with those cold and timid souls who neither know victory nor defeat.

Invite your critics into the arena 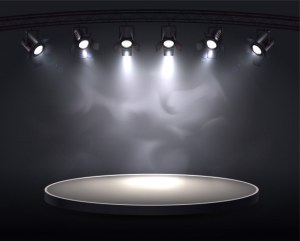 The quote resonated with me.  I am about to step into the arena. I will be vulnerable and exposed as I present the best of me to the world in the form of a book. Why wouldn’t I feel some fear?  There will always be critics in the audience, both real and imagined. Brene urges us to reserve a seat for the four critics who will undoubtedly turn up.

So come on in critics and take a seat up the front. You will not tell me anything I haven’t already thought of. You are so familiar. I will see you and I will hear you but I will continue.  I am ready.  I will dare greatly. I will step into the arena and if I falter, as I may…I can always watch Brene Brown again, pick myself up and continue.

When did you step into the arena?

3 thoughts on “Stepping into the arena”